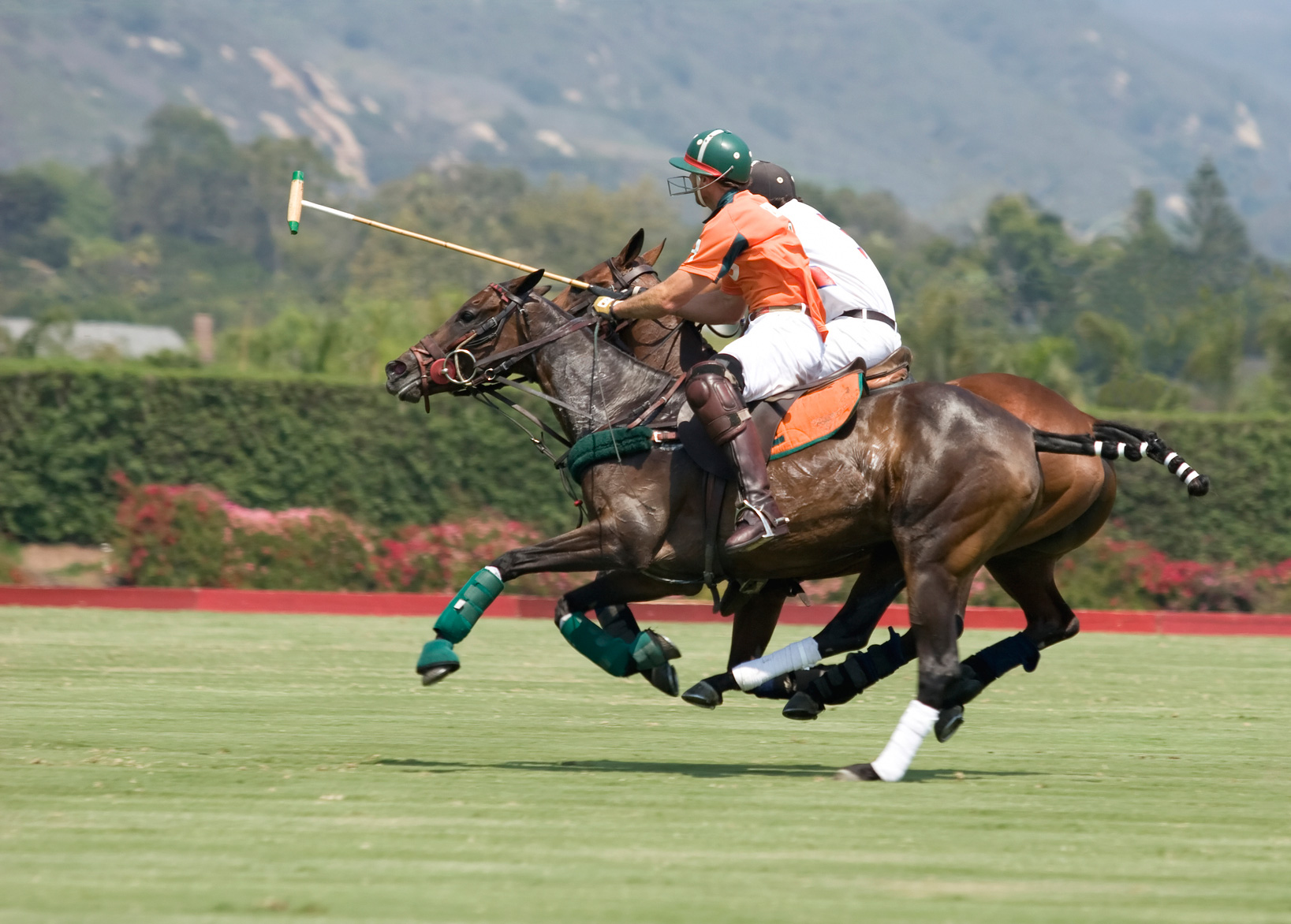 A beginner’s guide to Polo

Played in 60 countries and enjoyed by over 50 million people a year, this ‘sport of kings’ (or princes) is actually accessible to anyone. Horsefinder has put together a beginner’s guide to Polo, the fast-paced and interesting game, outlining everything you need to know.

The history of Polo

This exciting game probably evolved among nomadic warriors about 2000 years ago and is the world’s oldest known team sport. The first recorded match was held in 600BCE between the Persians and Turkomans. Teams could number as many as 100 and games were mini-battles. It became the sport of nobility, and the national sport of Iran, with both women and men taking part. Used to train cavalry, it was spread by the Mogul Emperors in India − the oldest existing polo ground is in Manipur, dating from 33 AD − and was played from Japan to Constantinople in the Middle Ages. Tamerlanes’s polo ground can still be seen in Samarkand and Akbar the Great’s polo stables are still in place. The name ‘polo’ is said to derive from the Tibetan word ‘pulu’, which means ‘ball’. Captain Robert Stewart and Major General Joe Sherer first saw a polo match in Manipur and in 1859 held the inaugural meeting of the first polo club. It was further spread by the British Army and British tea planters, and in 1874 the Hurlingham rules were created, which limited numbers to a maximum of five per team, included an offside rule and are still in existence.

The basics of Polo

Polo is played outdoors in a ground measuring 300 yards long by 160 yards wide, with teams of four riders and their mounts, or in standard indoor arenas with teams of three. Play usually lasts for about one and a half hours and is divided into eight ‘chukkas’ of seven minutes each, divided by four-minute breaks. The object of the game is to hit the ball in between the goal posts placed eight yards apart and centred at each end of the field. The rules are designed to protect both horses and players from injury, with the player who has hit the ball having ‘right of way’ and other players forbidden to cross the line of the ball in front of that player. Two mounted umpires, and a referee placed in midfield, do the officiating.

All mounts are referred to as ‘ponies’, although they are full-sized horses ranging from 14.2 to 16 hands. Much of a team’s success depends on the quality of its mounts. They must have remarkable agility, responsiveness and above all speed. Most are Thoroughbreds or Thoroughbred crosses although they must also show the intelligence of an Arabian and the manoeuvrability of a Quarter Horse. Polo ponies are trained to respond to one hand on the reins and to cues from the rider’s weight and legs, and will carry them smoothly and swiftly to the ball. Training begins at three years old and may last for up to two years. Ponies are at their peak at around six or seven years old, although barring injury, they may continue to play until 18 or 20. Players need more than one so that they can exchange tired mounts for fresh ones between ‘chukkas’. A ‘string’ of ponies from two to six is required depending on the level of the competition. 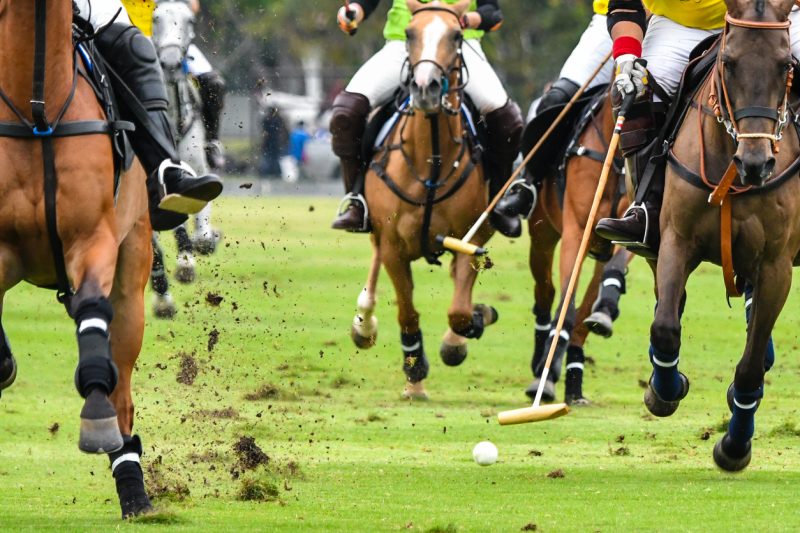 Teams may be mixed, with each player being assigned a certain role. Number One is offence-oriented and generally covers the Number Four player of the opposing team. Number Two will run through and score themselves while also covering the Number Three player of the opposing team. Number Three is the tactical leader and must feed balls to Number One and Number Two, as well as defending. They are often the strongest player with the highest handicap. Number Four’s role is chiefly defensive. All players must be right-handed.

Players use a protective equestrian helmet with face guard, gloves, kneepads, wristbands, spurs and whip. Team jerseys displaying the player number are also worn. Mallets range between 49 and 54 inches, and have a rubber grip plus a ‘sling’ or thong for wrapping around the thumb. Saddles are English-style, similar to jumping saddles, with a flat seat and no knee support. Stirrup irons and leathers are heavier in order to support the rider when standing in them. The pony will have polo wraps from knee to fetlock to prevent injury, with gallop boots in team colours often used as well. The mane is roached, and tail docked or braided for safety. Double reins are used for greater accuracy. 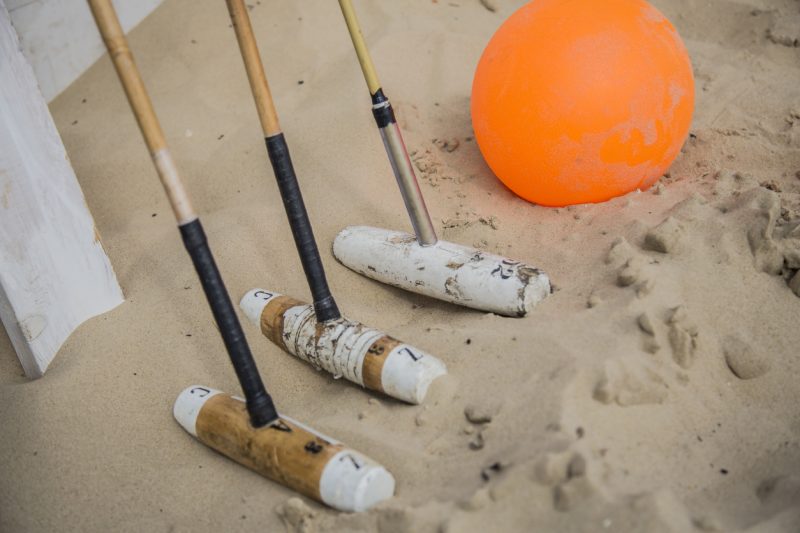 Getting started in Polo

Polo is perfect for anyone who loves both horses and teams sports. Surprisingly, you don’t have to be able to ride, or to be a member of a club to learn to play. Lessons, which include the hire of a seasoned polo pony, cost about the same as a private dressage lesson, with group lessons costing less still. Basic equipment can be hired until you’re ready to get some of your own. Look out for clubs that positively encourage grassroots participation and that offer daylong intensives where you can meet other interested players and sharpen your game. You’ll find a full list, organised by region at the Polo Times website.